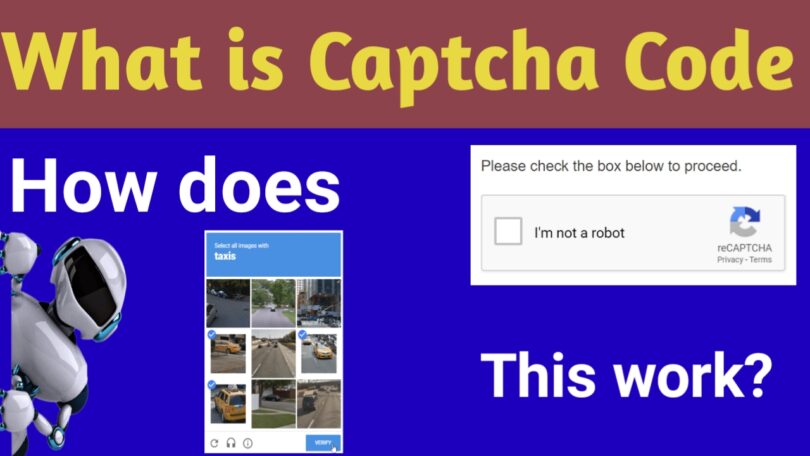 Friends, in today’s time, every person who uses the internet will know about captcha code. We can see this captcha code while submitting, sign up, log in, form on any official website, etc. But talking about captcha code, many people will not know about it or what is captcha and why is it used, then today we will try to answer the same questions in this article.

What is captcha code?

There is a type of automated code that when input on a side we see an image mixed with numbers and alphabet. We have to read that code correctly and write it in a text box, usually to tell the difference between humans and machines. This is why this captcha code can only be understood by humans.

What are the types of CAPTCHA codes?

There are many types of Captcha Code, But I’ll tell you about the most frequently asked CAPTCHA.

Text Recognition Based and Audio Based

In this type of captcha code, you see alphabets and numbers crosswise in a box, which you have to identify and fill in the box below. In this, you also have to identify the capital letters and small letters.

There is a voice given in the audio and there is a number in that voice which you have to write in that box after listening.

In this type of captcha, an image comes in front of you. In this image, you have to select the things mentioned. For example, by showing the image of a road, you will be asked to select in which box the car is seen it. Selecting the right image will solve your code.

Solve all these types of Captcha takes a lot of time, so in 2009 Google bought a company making reCaptcha and after making a slight change, launched a reCaptcha in the market that does not need to write or identify anything.

Only one box is given in it, which is written not a robot, and by clicking on it, Google finds out from its algorithm that a clicking person is a machine.

In this verification, Google works in many ways like what is your IP address, your location, how long you have been on that site, how much your cursor moved while clicking that box, etc.

In this type of captcha code, the text is given a 3D effect that is very difficult to solve, and it is placed only on very important and confidential sites.

Why do we need CAPTCHA?

There are many people out there who want to damage your website for various reasons. Improper competition, advertising, sometimes malicious behavior, or just fun. You can guess that this is not the case for most web users who are trying to exploit the vulnerabilities of your system, but the problem remains.

The simplest example is DOS (denial of service), a type of attack that focuses on making a resource unavailable. The attacker sends a large number of requests to make the server unable to return the results. It simply blocks your website.

Doing this attack in person, by a real person, would be a horror. It would be boring, tedious, and simply impossible. You cannot manually request efficient amounts, but the computer is not tired or bored. It is not a problem for them to make hundreds of requests… second. Captcha helps you identify such behaviors and block them.

Another example is a malicious advertising strategy. Every Internet user is familiar with spam. You receive tons of unsolicited emails every day. It is easy to block a particular email, but harder to protect against unknown people. If a spammer uses only one email account, we can easily stop it.

But now imagine that he hires a bot to use one of the free email providers (the one who doesn’t use captcha). In this way, it can set up a new account every several minutes and send spam content from different addresses.

A third example, more trivial – comments. Too many websites, even small blogs, are fighting off unwanted advertisements. Of course, we can close the eye on one or two spam messages. Unfortunately, we often see hundreds of them.

It is normal to find well-written content with a section containing spam comments. If you see a post with hundreds of the same message (not really related to the text), the owners probably don’t use captcha. Even for real people, but with bad intentions (so-called “trolls”), it can be a discouraging guise.

How does captcha work?

Captcha has its roots in the early twentieth century when Alan Turing wanted to answer a question – Are computers capable of thinking like humans? He set up a game of mimicry, where an interrogator was forced to ask two participants a series of questions.

If the interrogator was wrong or unable to make a decision, the machine passed the Turing test. The goal of CAPTCHA is to ask questions or challenges such that computers are unable to deal with.

At the same time, it should be easy for humans to answer. The plan is simple. You type in some data or perform some other action and then confirm it by passing a captcha test.

The most common type of test is an image of a group of distorted letters. It uses the issue of computers not being able to think abstractly and “seeing” the world the way people do.

While humans are truly sophisticated with the processing of visual data, computers lack those skills. When you look at the image, you can quickly read the pattern.

The brain of humans is constructed in such a way that it always discovers a known pattern or shape. You know the contradiction by looking at the faces and shapes in the trees, the clouds … even this is just an illusion.

This is called pareidolia. While you can easily read the above words and write them, for a computer it is just zero and a mass of people.

Nevertheless, we need to remember how machines work. The challenges of captcha should not be limited to a certain number. If they want, it will be easier to teach the computer which text matches a given picture.

Therefore, many constructors use sophisticated algorithms to randomly generate their malformed texts.

The creators of ReCAPTCHA drew another idea. He used this process … digitized books and asked users to decrypt small pieces.

The concept of this service is not very old and was invented only in 2000 by Gausbeck Levchin West. He first applied for the sign-up page of the website idrive.com to keep the page safe. This experiment was successful, after which many search engines like yahoo and the like started using Captcha code.

In 2001, PayPal also used it to protect users from any kind of fraud.
Lewis Bohn’s team reported in 2003 that the Captcha Code was invented in 1997 by two teams. Which is in the first team. Mark D, Lily Bridge Martin Population, J. Border, and the other team have Iran Ray Sheaf, Gilli Ranon, and Aiello Sol. The main goal of all of these was to make the security of the website strong, which is proving very beneficial today.

Many times you get very upset while solving it. But knowing the benefits of this, there will be no complaint from your service from today.

You have already understood the benefits of this, but there are two aspects to everything. Then how can we avoid this? Then let us know about some of its disadvantages, or say about the problem of solving this code.

There seems to be no right solution. With every new generation of captcha, there are new generation bots. The more sophisticated algorithms you use to protect from them, the smarter they become. But does this mean that captcha is completely useless and just annoys users? No, the idea is still good. Even simple CAPTCHAs represent a significant constraint for the most primitive bots. We should not be deprived of this, but please note that CAPTCHA does not protect you and/or your users about data/credentials leakage by any third-party script included in a page, browser extension, or a Mithali Bhajan Can be triggered.