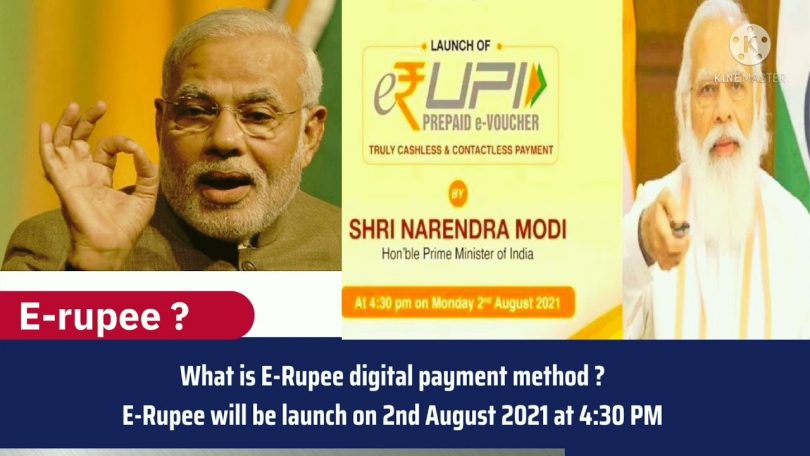 e-RUPI is a cashless and contactless person- and purpose-specific digital payment solution launched by Prime Minister Narendra Modi via video conference on Monday.

Addressing the event, the Prime Minister said that e-RUPI Vouchers are going to play a big role in making DBT more effective in digital transactions in the country and will give a new dimension to digital governance. This will help everyone in targeted, transparent and leak free delivery. He said that e-RUPI is a symbol of how India is moving ahead by connecting people’s lives with technology.

‘e-RUPI can be issued by the government or corporate to its employees for targeted use as it allows purchases only from merchant outlets, but does not allow direct cash-out or peer-to-peer transfer, Mihir Gandhi – Partner and Leader – Payment Transformation, PwC India.

It is a QR code or SMS string-based e-voucher, which is delivered to the mobile of the beneficiaries. Users of this seamless one-time payment mechanism will be able to redeem the voucher without having to access the card, digital payment app or internet banking at the service provider.

It has been developed by National Payments Corporation of India in collaboration with Department of Financial Services, Ministry of Health and National Health Authority.

How to use e-RUPI Voucher

Where will the e-RUPI voucher be used?

These vouchers will be used mostly for health related payments. Corporates can issue these vouchers to their employees.

InfrasoftTech provides an e-RUPI technology stack by helping banks to implement the technology – from integration with existing systems to deployment as per their target beneficiaries.

Presently, it is working with two surviving banks out of 11 as per NPCI. It is soon adding more customer banks with e-RUPI facilities.

The two banks are Punjab National Bank and Bank of Baroda.

Know- what are the 10 advantages of digital payment

How is e-RUPI different from digital currencies?

This is different from cryptocurrencies which let you buy goods and services or trade them for profit. More importantly, it is regulated by the government. Prepaid vouchers to be paid for by the government will be largely used, at least initially, to provide welfare subsidies.

Unlike China, Europe and some other countries, India is not at the forefront of issuing virtual cash, but the rise of cryptocurrencies like Facebook’s Diem has encouraged authorities to pursue pilot projects in the wholesale and retail sectors in the near future. has done. .

Explaining how these vouchers cannot be converted into cash, he said, “The government is promoting liquidity in the economy. It’s saying go out, buy it, spend it. Earlier, the government used to remit funds to the beneficiary’s accounts which are not used or most of the time are used for some other purpose.

Malviya said: “The purpose of cryptocurrency and e-rupee is the same – to reach the unbanked population, but the approach is different here, cryptocurrencies are distributed, and a decentralized medium of exchange. On the other hand, e-RUPI is centralized. But it is a digital payment protocol of its kind.

Which nations do they have?

The US, South Korea and many other countries have used similar voucher-based incentives for welfare services.

“Some states in the US have implemented a digital voucher-based system for educational institutions to create a targeted delivery structure. But no country has implemented e-voucher system on a large scale in the past,” Malviya said.

He said, “e-RUPI is one of the efforts of the government, and successful deployment of e-RUPI can increase India’s GDP by 14 per cent, which looks very promising for the better future of Indian economy.”

>> What is UPI? Know the use of UPI, full form, benefits, importance. Complete information about UPI