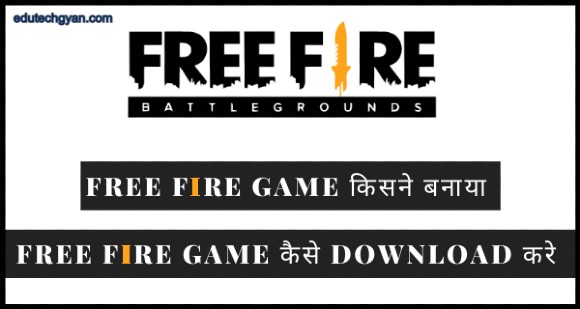 Welcome, who has created our another new post Free Fire game, in which we will give you information related to Free Fire game like who is its owner and which country is this game from as well as many interesting information in detail.

Friends Free Fire which is a very famous game and it is liked by many people and after the ban of PUBG in India, its popularity has increased even more. But still many people are not fully aware about Free Fire.

You know that PUBG was banned for being a Chinese app. But do you know which country the free fire game belongs to or who owns it? If your answer is no, then surely this post is going to be very important and interesting for you.

So read this post very carefully from beginning to end and get complete information in detail and tell us by commenting at the end how did you like this post of ours.

Who made the free fire game?

Free Fire game is a very famous mobile game and maybe you also play this game but do you know who made it? let me know if you don’t know

The game is developed by Garena’s two smaller companies, 111 Dots Studio (Vietnam) and Omens Studio (Netherlands). The development of this game was started in mid 2017.

Free Fire game is published by Garena Company. Garena is a Singapore-based game developer company owned by Forrest Lee who serves as the CEO at his company and runs his company.

Now if we talk about the owner of Free Fire Game, then its owner is Forrest Li. Those who were born in China but now live in Singapore and are citizens of Singapore. He completed his studies from Stanford University in America and also completed his MBA degree from the same university.

Above we mentioned that the owner of free fire game is Forest Lee but it is equally true to say that the owner of this game is C Limited Company because under this company comes Garena Company which is owned and CEO of Forrest Lee and this The headquarters of the company is Located in Singapore.

Free fire game is related to which country?

So your curiosity and doubt about this question ends here because here we are going to answer you with complete satisfaction.

Free Fire game is a game of Singapore country because this game is made under Garena company which is headquartered in Singapore and it can be said that this game is from Singapore.

If you understand the reason behind its creation, then in the time of 2017 PUBG-G was making a lot of noise as a PC game but at that time there was no Royal Battle Game available for Android.

Seeing this shortcoming, the idea of ​​making such an Android game came to Forrest Li’s mind and this game was made.

After this, when this game was launched, it gained a lot of popularity in a very short time and it became more and more liked in all the countries launched and currently it has more than 450 million active users worldwide.

When was Free Fire game launched?

The beta version of Free Fire game was launched on 30 September 2017 and its official version was uploaded on playstore on 20 November 2017.

After 2 months of uploading, this game started getting very good popularity and it was also rated as the number one game in 24 countries and in 2020 this game was also given the award of Playstore’s Best Popular Voted Game of 2019.

Similarly, if you are an iPhone user, you can easily install and play the Fire Fire game from your iOS store.

Apart from this, if you are facing any problem in downloading then you can also download free fire game from the download button given below.

Friends were the ones who made our post Free Fire Game and hope that after reading this post completely, you must have got complete information about this topic.

If you liked this post of ours, then share it to as many people as possible through your social media platform.

which game is best pubg or free fire

Free Fire is also a battle royale game with up to 50 players. But in pubg there are 100 players. Both the games are very good.

The game is developed by Garena’s two smaller companies, 111 Dots Studio (Vietnam) and Omens Studio (Netherlands). The development of this game was started in mid 2017.
Free Fire game is published by Garena Company. Garena is a Singapore-based game developer company owned by Forrest Lee who serves as the CEO at his company and runs his company.