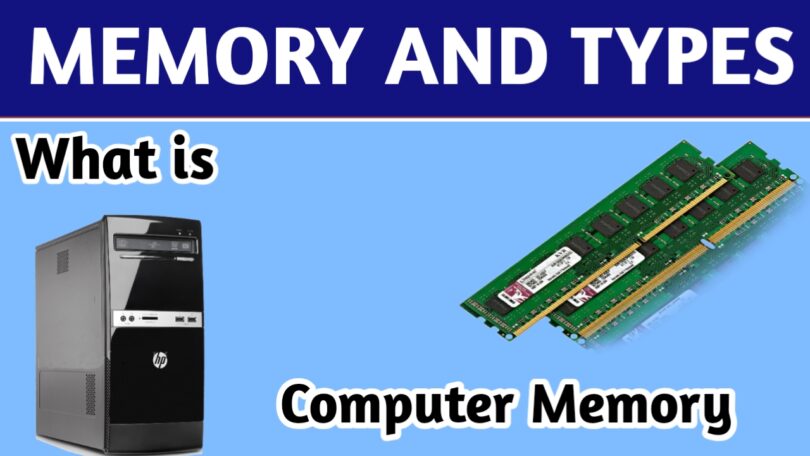 CPU is the brain of a computer. It processes all the information it receives through the input devices and stores it in computer memory.

A computer also has a memory just as we have to remember things . The storage capacity of a computer is called its memory. Computer memory is used for storing data and instructions.

In this article, we shall learn about computer memory.

There are other higher units of measuring memory as given below.

Computer memory can be classified into two categories . They are primary memory and secondary memory.

Primary Memory : Primary memory is also known as the main memory the internal memory. It is the in build memory that is fixed inside the CPU. It stores the data or instructions currently in use by the computer. The minimum size of primary memory is 256 MB. We can increase its size any time.

Primary memory can be divided into two parts – RAM and ROM.

1.  RAM : RAM stands for Random Access Memory. RAM refers to read and write memory. Information can be written onto and read from RAM.

2. ROM : ROM stands for Read Only Memory. It keeps the data permanent. It is non volatile in nature. It retains the data even when a computer is switched off.

In most computers ROM is used for storing a special program called BIOS {BASIC INPUT OUTPUT SYSTEM}. This program helps to load the operating system when the computer is switched on.

There are three different kinds of ROM.

PROM : PROM stands for Programmable Read Only Memory. PROM is a memory chip on which we can store a program. But once the PROM has been used, we cannot wipe it clean and use it to store something else. It can be programmed only under special conditions.

EPROM : EPROM stands for Erasable Programmable Read Only Memory. We can erase its stored information by exposing it to ultraviolet light. EPROMS are cheap and reliable and hence they are widely used.

EEPROM : EEPROM stands for Electrically Erasable Programmable Read Only Memory. The information written on it can be erased using electrical signals.

Secondary memory is known as auxiliary memory or external memory. It is used to store information for a longer period of time. It is needed because primary memory of a computer is insufficient to store and save large amount of data for future reference and retrieval.

Let us now discuss some of the secondary storage devices.

1. Hard Disk : A hard disk is the main secondary storage device found inside the cabinet of a CPU. it can store large amount of data all the burden of a computer can be stored in a hard disk.A hard disk is made up man rigid metal plates coated to store data magnetically.

2. CD-ROM : CD-ROM stands for Compact Disc-Read Only Memory. It is popularly known as CD. It is the most commonly used storage device. It is a thin circular disk with a reflective metal coating. The diameter of a CD ranges from 10 cm to 30 cm. A typical CD is of 13 cm diameter. One CD can store 600 to 750 MB data on it.

Nowadays, we get two kinds of CDs. They are:

3. DVD : DVD stands for Digital Versatile Disk or Digital Video Disk. It is very similar to a CD but can store much more data. It is an optical disk storage device. Its capacity may range from 4.7 GB to 8.5 GB.

4. Pen drive : A pen drive is also known as a flash drive. It is very small in size. It can be used to store and transfer data from one computer to another. It can be connected to the USE (Universal Serial Bus) port of a computer. It can easily be carried in the pocket. It can store a large amount of data like 1 GB, 2 GB or more.

5. Blu-ray Disc : A blu-ray disc is similar to a CD or a DVD in appearance but it can hold up to 25 GB of data. It uses blue lasers to read and hold a large amount of data. A blu-ray reader is required to use a blu-ray disc. It is mainly used for storing very high-quality video files and video games tha require large amount of storage space.

6. Memory Cards : A memory card is used to store data in various electronic devices like mobile phones, digital cameras, mp3 players and many other portable devices. It is small in size and can store up to 32 GB of data. We can transfer the data stored in a memory card to our computer.