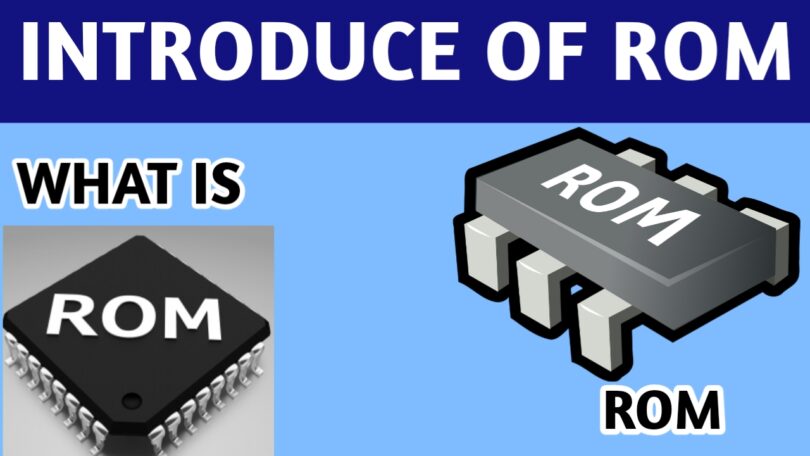 Hello, all of you guys are welcome to this website.  We will learn about Rom in this article.  What is ROM?  How many types of ROM are there?  What is the full form of ROM?  What is its importance and its function?  And so on.  You will find complete information about ROM in this article.

As we all know how much memory is required to collect data or information for computer or any electronic device.  There are many types of memory for storage devices, one of which is ROM.

A ROM is a type of memory device.  It is also called the primary memory of a computer.  Data is permanently saved in this ROM.

Some data of computer or mobile is stored in ROM, after which no changes can be made in it.  It can only be read.

It is used only when starting a computer or mobile.  It helps to turn on the system.  And links the BIOS with the Operating System.

Once you store data in ROM, you cannot save new data again.  Its data can only be read.  Guidelines related to computer functionality are stored in this memory.

The process, which is called booting process, is done through opening the computer.  In addition to computers, the booting process also takes place in washing machines, ovens, microwaves, smartphones, etc.  Which are programmed by ROM itself.

It is a Non – Volatile memory.  Data is stored forever in this permanent storage device.  It is written only once by the company (manufacturers).  Therefore, no tampering with its data is possible.

Let us now know the characteristics of ROM.

Let’s now know the type of ROM. Rom is a type of non-volatile memory. It means that such a memory is always stored or safe, it is called permanent non-voltile memory. Mainly ROMs have been classified into three parts:

PROM has a full form Programmable Read Only Memory. It is a special type of ROM memory in which the data adapted to the users is programmed by a particular process.

Once the data or Suhana is stored in this type of memory, it can neither be mstated nor deleted. Hence it is also called one time programmable device.

After a subsequent data store in PROM, no changes can be made to it again. It consists of thousands of diodes which are fused to a high voltage and recorded as desired. Once programmed, they become like a normal ROM.

The full form of EPROM is Erasable Programmable Read Only Memory. Its name suggests that it can be reprogram or rewrite again by erase the store data or program several times in it.

The full form of EE-PROM is Electrically Erasable Programmable Read Only Memory. The use of EE-PROM has increased in today’s modern era. It is also called flash memory. The best example of this is Pen Drive.

This is only readable memory. Compared to RAM is quite affordable. These are very reliable memory. It does not need to reefresh. ROM, electricity (energy) consumption too much. In this, the instructions of all the Basic Functionality of the computer are stored. Data is not deleted even if the power cut.

How does ROM work?

Let us now know how ROM works.  As you may have known, ROM is an Integrated Circuit Chip that is already programmed in computer or any electronic device with various functions.

The program or data stored in it cannot be edited or deleted again.  In this, programs are stored by the company at the time of manufacturing.  It is also called Firmware.  A standard ROM chip cannot be rewrite or re programmed, so its programming is very important to be completely perfect and also to have complete data.

ROM is used for booting the computer while on.  BIOS (Basic Input Output System) software is installed in ROM.  All these works are done by the company at the time of manufacturing.

What is the difference between RAM and ROM?