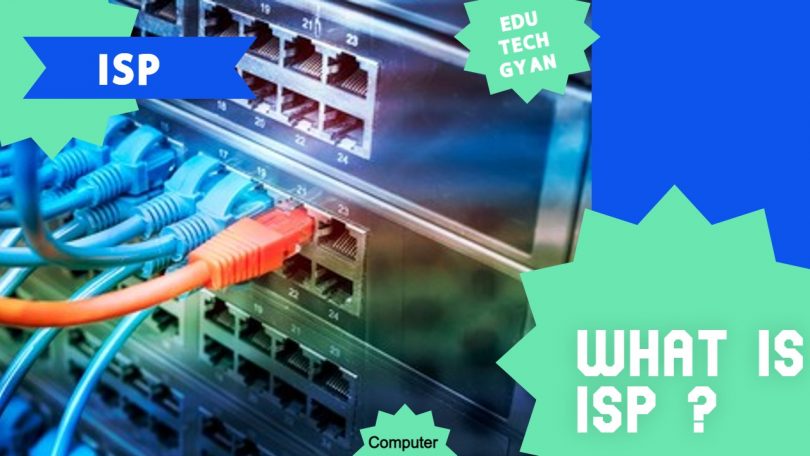 An ISP is a company that provides Internet service to its customers or users. If you understand it in simple words, then the company from which you get internet connection for your home or office, the same company is called your ISP.

An Internet Service Provider (ISP) is an organization that provides access to and services that use the Internet. – Wikipedia
It is only through ISP that you can connect devices like your smartphone, laptop, computer, etc. to the Internet. For the first time in India, Internet service was launched on 14 August 1995 by Videsh Sanchar Nigam Limited (VSNL). Thus the first ISP company in India is Videsh Sanchar Nigam Limited (VSNL).

>>INTERNET SERVICES | History of The Internet

What is the full form of ISP?

ISPs offer several types of internet connections to provide connectivity to their customers.

The full form of DSL is Digital Subscriber Line. It’s similar to a dial-up connection, but much better. Because in this also the Internet service is delivered to the user through the telephone line, but the Internet connectivity in this is better than the speed dial-up.

It provides high-speed Internet service to the user’s home or office through today’s modern telephone networks. Many telecom companies and phone companies provide DSL connections. It can also be called a form of broadband connection.

Telephone lines are not used for cable internet connections. For this cable wire is used, which is called coaxial cable. The ISP lays the coaxial cable at its user’s home or office. which is connected to a modem.

The modem is then connected to the computer via an Ethernet cable. After which the user gets high speed internet service. It can also be called a one way broadband connection. Coaxial cables can transfer data at higher speeds than telephone lines.

A wireless broadband connection is a type of connection that does not use any wires. In this the connection is without cable or without wire. Wireless connection provides internet via Wi-Fi. If you have more than one computer, tab, smartphone, you can get Wi-Fi internet connection.

Nowadays Wi-Fi is available in every smartphone, tab or laptop. So we easily access internet by using Wi-Fi in public places like hotels, restaurants, airports etc. Apart from this, you can also get Wi-Fi broadband connection in your home or office.

For this, the user needs a modem as well as a router. Wi-Fi works like any other wireless technology. It uses radio frequencies to transfer signals by connecting two or more devices together.

This is a new technology, whose internet speed is many times faster than all other types. Its download speed is around 1 Gbps. In this, fiber optic cable is used to provide internet service to the user.

This is a new technology, so currently only available in select and major cities. ISPs want to make it available in more cities, but the cost of installing fiber optic cabling is very high, so ISPs have not been able to reach it in many cities yet.

Internet service providers are divided into three parts according to their level and their services:

They are also called the backbone of the Internet provider. Because if this company fails or there is any problem in it, then the internet service of many countries can be destroyed. As you all know that no one owns the internet.
Tier 1 ISP Company
So how does the internet reach us and to whom does the fee we pay go to? Internet access to us has been possible only because of Tier 1 ISP company. And a major part of the fees we pay goes to them. Which works to provide internet between countries and continents by laying cables under the sea. Some examples of Tier 1 ISP company :- Telstra, Sprint, Singtel, AT&T, NTT.

Tier 2 ISP company operates on a national level. These types of companies work between Tier 1 and Tier 3 i.e. their reach remains regional or within the country. These are medium type ISPs. Those who are smaller than Tier 1 but bigger than Tier 2.

In this type of company, internet traffic is exchanged by peering agreement as well as transit. This means that transit connections are usually made between Tier 1 and Tier 2, and between Tier 2 through peering agreements. Some Examples of Tier 2 ISP Company :- Reliance Jio, Vodafone, Airtel, BSLN.

Tier 3 ISP companies operate on a very small scale. These are the smallest ISPs, who work within cities by providing internet connection at home, office or colony. It works by purchasing an internet connection from a Tier 2 ISP and bringing the connection to common people’s homes, offices, etc.

This type of ISP company buys internet from Tier 2 companies according to the traffic and provides internet facility to the end customer i.e. areas like your home or office. Some examples of Tier 3 ISP company:- Tikona, Hathway, Spectra, Den.

>>What is IP Address in Networking

How does an ISP work?

No one owns the internet. It is a global connection of many networks, large or small. And because of this, all the devices around the world are connected to each other through the Internet. In fact, the Internet is a huge network of interconnected networks, which in computer language is called transmission media.

Many high bandwidth data lines are used to access internet facilities in every corner of the world. It is also called the backbone of the Internet. These lines are connected to major internet hubs in various places. After which these hubs distribute the data to different locations. These internet hubs are called ISPs (Internet Service Providers).

Earlier, to provide internet service, ISPs had to install wires throughout the area. But with the advent of wireless media, it has become easier for the user to access the Internet only with the help of towers and satellites. Through this, every person in every corner of the world has access to the Internet.

In today’s time, due to the advanced technology, the competition among ISP companies has increased a lot. Due to which internet service has become very cheap in the market today.