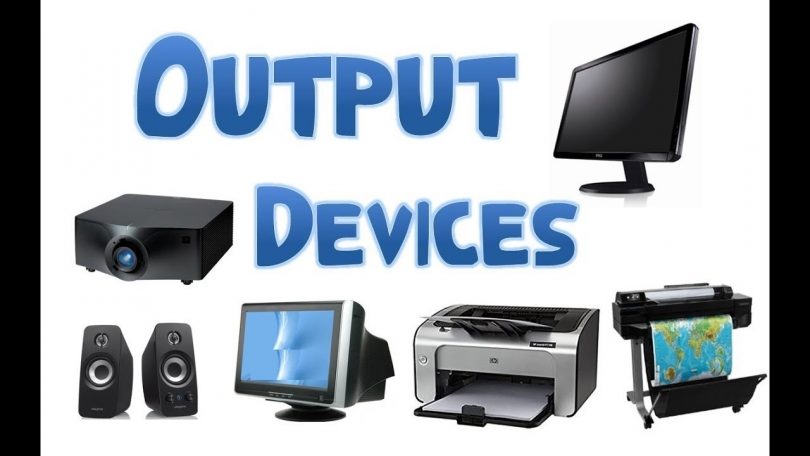 What is an output device?

After the user gives input to the computer, the device through which the user receives the output is called an output device. An output device is a peripheral hardware device of a computer, whose function is to provide data or information to the user as output.

Output is made up of two words Out and Put. Out means “out” and put means “to put”. To mix the two means to “take out”. After processing the data or information, this device shows it outside, such as: – Monitor, Speaker, Printer, Projector etc.

Also you should know that output device is an electronic device as well as a hardware device. These devices are part of the computer. Through whatever device the computer gives us the result/results. In simple language it is called output device.

Some examples of output devices, which will be easier for you to understand. eg. Computer gives us output through all these output devices like monitor, printer, projector, speaker, headphone, plotter etc. Let us understand the example in detail.

Monitor is an electronic device. It is a hardware device as well as an output device. It is also called virtual display unit. It looks exactly like TV. It shows all the processes running inside the CPU (Central Processing Unit) as a soft copy on its screen.

A computer is considered completely incomplete without a monitor. It is an important part of the computer. Because without the monitor the computer will turn on, but without it you cannot do any work on the computer. The monitor consists of a screen in which the result of input given by the user is displayed. Since it shows all the information on the screen to the user, it is also an output device.

What are the types of monitors?

The full form of CRT Monitor is Cathode Ray Tube Monitor. CRT technology is used in this type of monitor. This technology is also used in making television screens. This type of monitor uses CRT technology to display images or images. And a vacuum tube, deflection circuit, electron gun and glass screen are used to make this CRT.
When electrons begin to be produced inside the CRT, the screen is bombarded by these electrons. CRT’s fluorescent screens use high energy electrons to display images. Well you must have also seen, earlier television used to have picture tubes. In that too CRT technology is used. That’s why they were also very heavy.

They weighed a lot and they also consumed a lot of electricity. Even today you get to see CRT monitors in many government offices.

>> What is Computer Software? || Types of Software?

In this, all numbers of light are polarized and passed into the liquid crystal layer, to create an optical effect. After which the graphics image becomes on the screen.

This type of monitor consumes very little energy, and provides better graphic quality. The most popular and used monitor in today’s time is LCD.

LCD monitors are lightweight, they weigh very little. They can be easily installed in small and small places, they do not require much space.

The full form of LED is Light Emitting Diode. This is the latest type of monitor in today’s time. Like LCD, it is also a monitor with flat panel display. LED monitors have flat panels and slightly curved displays, and use light-emitting diodes for back lighting.

The most important thing about this type of monitor is that high contrast images are produced in it. And besides, when it is disposed of, it doesn’t read too many negative environmental impacts.

This type of monitor has a very slim design. It does not cause much heating. And it consumes very little power. And at the same time it is also more eco-friendly.

It is very durable and durable. Its durability is much higher than that of CRT and LCD. It consumes very little electricity, hence it is also called as eco-friendly.

The full form of OLED is Organic Light Emitting Diode. This too is an LED monitor display, but it’s a little different and advanced than that, and even better.

It is also a monitor of the latest technology. It is made by using organic materials (such as wood, plastics, polymers, carbon, etc.), which are used to convert electric current into light.

OLED monitors do not require a back-light, as it is capable of producing all kinds of different colored light to produce the true color.

And hence it saves space as well as electricity. This technology is also used in smartphones, TV screens, game consoles and PDAs. Its picture quality is very nice and good. OLED monitors are considered to be the best display technology ever.

A plasma monitor is a high contrast screen display with high brightness and vibrant colors. Tiny colored fluorescent lights are illuminated to form an image. After which the image is formed in its display.

Each pixel in this is made up of three fluorescent lights, red, green and blue. Which produces a variety of colors. Plasma displays are much more expensive than LCDs and LEDs, so plasma displays have become much less common in the market today. It is thinner than a CRT monitor and its brightness is higher than LCD.

Most people must know about printers. It is an external hardware device, which prints the information or information received by the computer on paper as output and provides it to the user.

Printer is used to print information or photos on a page. It is also an output device. If we want print of any document or photo, we will give input to computer, and as output we get printout copy of that document through printer.

>>Some important information about computer and its history

How many types of printers are there?

Impact printer is the oldest printing technology printer. Due to its low cost, it was in high demand among small industries. Typically, this type of printer was used for data processing, personal desktop printers, and word processing.

To print in an Impact printer, an ink ribbon is pressed against a metal on the paper, so that all the characters are printed on the paper sheet.

The drawbacks of these printers were that it was very slow and made a lot of noise. There are three main types of impact printers: dot-matrix, daisy wheel, and line printers.

1) Dot-matrix printer: In this each letter is printed with a set of small dots. In this a carbon is placed between the paper and the pin, when the pins are pressed on the carbon, the character is printed on the paper placed below.

2) Daisy Wheel Printer: The design of this printer is like a typewriter. It is very noisy and slow. Graphics cannot be printed with this printer. It consists of metal and plastic wheels, in which the vessels are made. When these characters are pressed, it hits the ribbon. After which the character is printed on the paper.

These are modern day printers. In this, laser or inkjet technology is used to print the image or character. The speed of this type of printer is much better than the impact printer.

The speed of these printers is not only fast, but they also do not make much noise. These types of printers are much cheaper than impact printers. Apart from this, its print quality is also very good. Inkjet printers, laser printers and thermal printers fall under the category of non-impact printers.

1) Inkjet Printer: Nozzle technology is used in this for printing. In this printer, ink is sprayed on the paper with a nozzle (a kind of pipe) to print the character or picture. The ink expands in the nozzle and is released as steam. After which the image is printed on the paper.

2) Laser Printer: Laser or electronic model technology is used in this printer. User can print multiple prints consecutively with one command in it. Their capacity is so high that they can print up to 200, 500 or 1000 pages at a time. It can print faster than inkjet.

Suppose you have given a presentation and have to present it in front of a thousand people. how you will? Will you show them all one by one? In this case it will take you more than 5 days. This is where the projector comes in handy. In a large hall, in a large screen, by connecting the projector to their computer or laptop, everyone can present their presentation at the same time.

Earphones are used to listen to sound in computers, laptops, smartphones, tabs etc. Its sound can only be heard by those who put it in their ears. Mic in earphone. It has also been fitted, with the help of which you can talk on the phone through earphones.

Apart from this, there are also headphones like earphones. Both pads on the headphones are larger than the earphones and are fitted with a belt, making it easy to wear over the head. It also has a mic for talking. Busy.

A plotter is almost like a printer in appearance. It is an output device. It is used to print vector graphics. Instead of toner, pens, pencils, markers and other writing tools are used to create multiple images in the plotter. The world’s first plotter was invented by Remington Rand in 1953.

No matter how much you zoom in or zoom out the image created by vector graphics, there is no difference in its quality. Vector graphics are printed only through the plotter. In this, logos, banners, posters etc. are made. Because logos, banners or posters are made in different sizes so as not to spoil their quality, they are designed in vector graphics and printed with a plotter.

Plotter is a graphic printer, it prints the graphic output on paper. It uses multi-color automatic pan to create the graphic. Plotters can only capture data in vector graphic format. They are mostly used in engineering projects, mechanical drawings, building plans and circuit diagrams etc. There are many types of plotters, such as:-

Please give your valuable feedback and feel free to tell us how Edu Tech Gyan can be improved further. Your suggestions will be helpful in making this website more purposeful and successful.

If you liked the article, please share this article with all your friends on social media, and help them. Apart from this, by following ETG, you can constantly get information about all new posts.